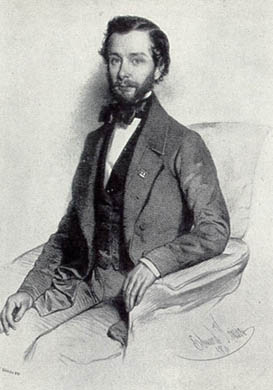 Henri François Joseph Vieuxtemps was a Belgian violinist and composer who was one of the most influential figures in the development of violin playing.

As a prodigy, Vieuxtemps was taken by his father on a number of European tours, during which he studied violin with Charles de Bériot in Brussels (1829–1831), harmony with Simon Sechter in Vienna (1833–1834), and composition with Antonín Reicha in Paris (1835–1836). He subsequently toured several times in Europe and made three tours of America (in 1843–1844, 1857–1858, and 1870–1871). He held two conservatory positions: one in St. Petersburg (1846–1851), where he exerted considerable influence on Russian violin playing, and the other in Brussels (1871–1873). His playing style, which combined extraordinarily precise virtuoso technique and full-bodied tone, was widely imitated. He was one of the earliest bravura 19th-century virtuosos. His compositions, too, were pathbreaking; his concerti especially contributed much to the development of that form.

He is also known for playing upon what is now known as the Vieuxtemps Guarneri del Gesu, a violin of superior workmanship.

Henri Vieuxtemps – Concerto for Violin and Orchestra No. 4, Op. 31