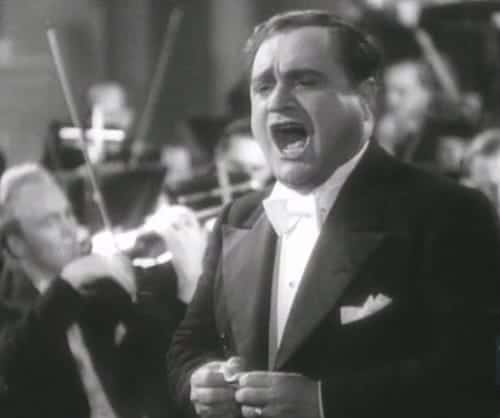 Beniamino Gigli was an Italian opera singer. The most famous tenor of his generation, he was renowned internationally for the great beauty of his voice and the soundness of his vocal technique. Music critics sometimes took him to task, however, for what was perceived to be the over-emotionalism of his interpretations. Nevertheless, such was Gigli’s talent, he is considered to be one of the very finest tenors in the recorded history of music.

In 1914, he won first prize in an international singing competition in Parma. His operatic debut came on 15 October 1914, when he played Enzo in Amilcare Ponchielli’s La Gioconda in Rovigo, following which he was in great demand. Gigli made many important debuts in quick succession, and always in Mefistofele: Teatro Massimo in Palermo, Teatro di San Carlo in Naples, Teatro Costanzi di Roma, La Scala in Milan (19 November 1918) and finally the Metropolitan Opera, New York. Two other great Italian tenors present on the roster of Met singers during the 1920s also happened to be Gigli’s chief contemporary rivals for tenor supremacy in the Italian repertory–namely, Giovanni Martinelli and Giacomo Lauri-Volpi.