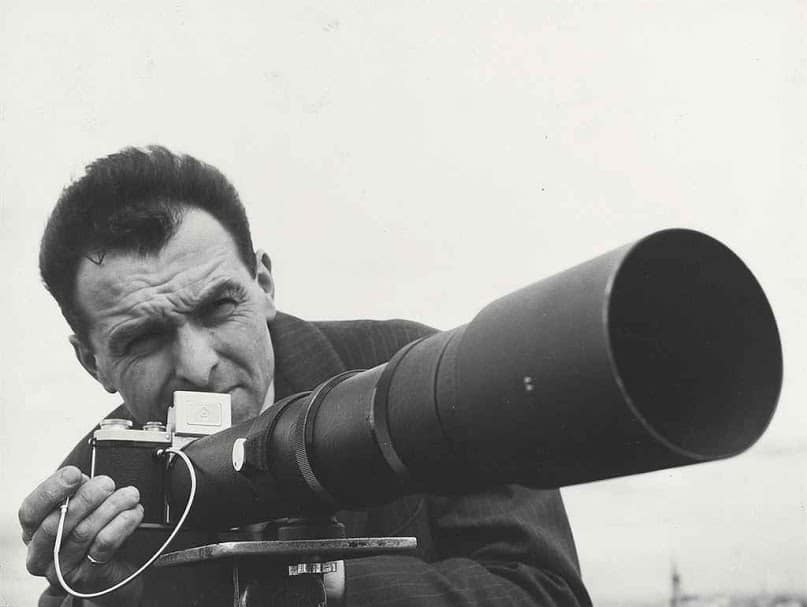 ”If I knew how to take a good photograph, I’d do it every time”

Robert Doisneau was a French photographer noted for his poetic approach to street photography.

As a young man Doisneau attended the École Estienne in Paris to learn the crafts involved in the book trade, but he always claimed that the streets of the working class neighborhood of Gentilly provided his most important schooling.

After leaving the school he had various jobs designing engraved labels and other items. In 1929, in an effort to improve his draftsmanship, he began photographing, just as Modernist ideas were beginning to promote photography as the prime medium for advertising and reportage, teaching himself the techniques.

Doisneau first worked for the advertising photographer André Vigneau, in whose studio he met artists and writers with avant-garde ideas, and then during the Depression years of the 1930s he worked as an industrial photographer for the Renault car company.

During the same period, Doisneau also photographed in the streets and neighborhoods of Paris, hoping to sell work to the picture magazines, which were expanding their use of photographs as illustration.

Doisneau’s series of photographs of a flea market in Paris was published in the periodical Excelsior. His early photographs have many of the features of his mature works: for example the seeming unawareness of the camera shown by the people in Sunday Painter (1932; see Trois secondes d’éternité) and the comic subject both add to the photograph’s charm, a quality Doisneau valued greatly.

With his career interrupted by World War II and German occupation, Doisneau became a member of the resistance, using his métier to provide forged documents for the underground.

He and Henri Cartier-Bresson were pioneers of photojournalism. He is renowned for his 1950 image Le baiser de l’hôtel de ville (Kiss by the Town Hall), a photograph of a couple kissing in the busy streets of Paris.

Doisneau was appointed a Chevalier (Knight) of the Legion of Honour in 1984.