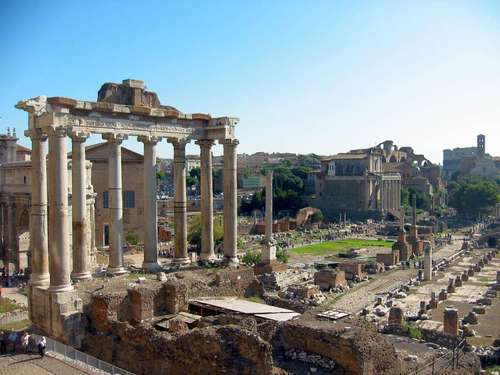 The founding of Rome can be investigated through archaeology, but traditional stories handed down by the ancient Romans themselves explain the earliest history of their city in terms of legend and myth.

The most familiar of these myths, and perhaps the most famous of all Roman myths, is the story of Romulus and Remus, twins who were suckled by a she-wolf as infants in the 8th century BC. They were purported to be sons of Rhea Silvia and either Mars, the god of war, or the demi-god hero Hercules. They were abandoned at birth, in the manner of many mythological heroes, because of a prophecy that they would overthrow their great-uncle Amulius, who had overthrown Silvia’s father Numitor. The twins were abandoned on the river Tiber by servants who took pity on the infants, despite their orders. The twins were nurtured by a she-wolf until a shepherd named Faustulus found the boys and took them as his sons.

When Remus and Romulus became adults, they killed Amulius and restored Numitor. They decided to establish a city; however, they quarreled, and Romulus killed his brother. Thus, Rome began with a fratricide, a story that was later taken to represent the city’s history of internecine political strife and bloodshed.

This story had to be reconciled with a dual tradition, set earlier in time, the one that had the Trojan refugee Aeneas escape to Italy and found the line of Romans through his son Iulus, the namesake of the Julio-Claudian dynasty.

The national epic of mythical Rome, the Aeneid of Virgil, tells the story of how Trojan prince Aeneas came to Italy. The Aeneid was written under Augustus, who claimed ancestry through Julius Caesar and his mother Venus. According to the Aeneid, the survivors from the fallen city of Troy banded together under Aeneas and underwent a series of adventures around the Mediterranean Sea, eventually reaching the Italian coast. The young son of Aeneas, Ascanius, also known as Iulus, went on to found Alba Longa and the line of Alban kings who filled the chronological gap between the Trojan saga and the traditional founding of Rome in the 8th century BC.

Myths and Legends – The Founding of Rome