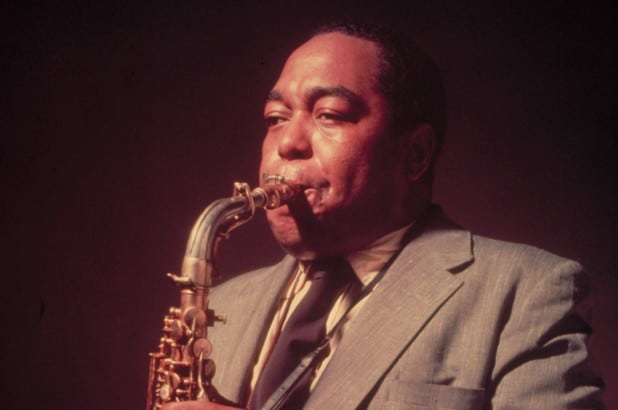 Charles Parker, Jr., also called Bird or Yardbird was an American alto saxophonist, composer, and bandleader, a lyric artist generally considered the greatest jazz saxophonist. Parker was the principal stimulus of the modern jazz idiom known as bebop, and – together with Louis Armstrong and Ornette Coleman – he was one of the three great revolutionary geniuses in jazz.

Parker grew up during the great years of Kansas City jazz and began playing alto saxophone when he was 13. At 14 he quit school and began performing with youth bands, and at 16 he was married – the first of his four marriages. The most significant of his early stylistic influences were tenor saxophone innovator Lester Young and the advanced swing-era alto saxophonist Buster Smith, in whose band Parker played in 1937.

Parker recorded his first solos as a member of Jay McShann’s band, with whom he toured the eastern United States in 1940–1942. His growing friendship with trumpeter Dizzy Gillespie led Parker to develop his new music in avant-garde jam sessions in New York’s Harlem. Bebop grew out of these experiments by Parker, Gillespie, and their adventurous colleagues. Parker and Gillespie played in Earl Hines’s swing-oriented band and Billy Eckstine’s more modern band.

In 1944 they formed their own small ensemble, the first working bebop group. The next year Parker made a series of classic recordings with Red Norvo, with Gillespie’s quintet (Salt Peanuts and Shaw Nuff), and for his own first solo recording session (Billie’s Bounce, Now’s the Time and Koko). The new music he was espousing aroused controversy but also attracted a devoted audience.

Parker’s influence upon modern jazz was immense. His many followers included Ornette Coleman, John Coltrane, and Albert Ayler – leading figures in the development of free jazz. His difficult life was the subject of Bird (1988), a film directed by Clint Eastwood.

Charlie Parker – All the things you are