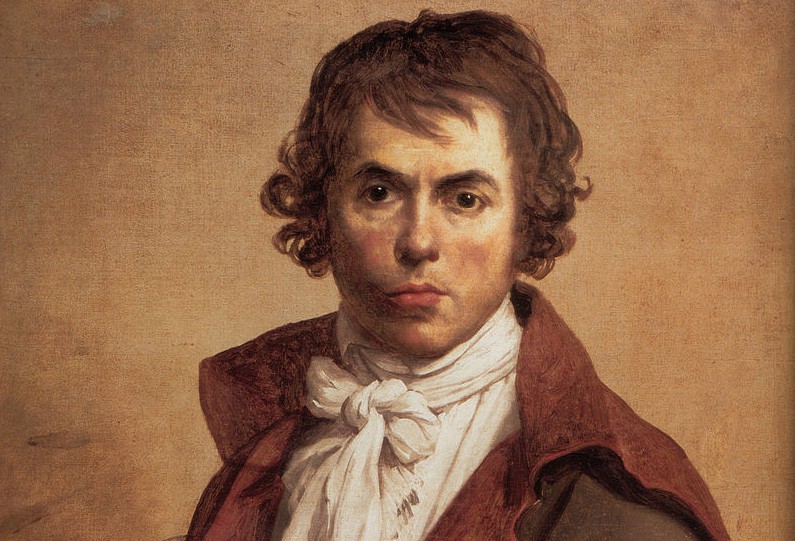 Jacques-Louis David was the most celebrated French artist of his days and a principal exponent of the late 18th-century Neoclassical reaction against the Rococo style. After classical literary studies and a course in drawing, he was placed in the studio of Joseph-Marie Vien, a history painter and at age 18, the obviously gifted budding artist was enrolled in the school of the Royal Academy of Painting and Sculpture.

He obtained, in 1774, the Prix de Rome, a government scholarship that not only provided a stay in Italy but practically guaranteed lucrative commissions in France, his prize-winning work being Antiochus and Stratonice:

Back in Paris in 1780, he completed and successfully exhibited Belisarius Begging for Alms:

and, back to Rome he painted the Oath of the Horatii. David won wide acclaim with his huge canvases on classical themes.

David became a culture hero; he added to his fame by producing Death of Socrates (1787), The Lictors Bringing to Brutus the Bodies of His Sons (1789).

When the French Revolution began in 1789, he served briefly as its artistic director and painted its leaders and martyrs, in a style that is more realistic than classical: The Death of Marat (1793).

David was a member of the extremist Jacobin group led by Robespierre, and he became an energetic example of the politically committed artist. He was elected to the National Convention in 1792, in time to vote for the execution of Louis XVI and was nicknamed “the Robespierre of the brush”. In 1794, after his friend Robespierre had been sent to the guillotine, David was arrested.

In 1799 he made a spectacular reentry into public notice with a new giant canvas, The Intervention of the Sabine Women.

In 1800 he produced his famous period piece, Portrait of Mme Récamier, which he left unfinished because the sitter, then at the start of her career as a reigning Paris beauty, proved unreliable about hours for posing…

Napoleon admired The Intervention of the Sabine Women and soon David, without acquiring political office, was appointed painter to Napoleon. His most important Napoleonic work is the huge Coronation of Napoleon in Notre-Dame (1807), followed by Napoleon Distributing the Eagles (1810) and The Emperor Napoleon in His Study at the Tuileries (1812).

After the fall of Napoleon in 1815, David was exiled to Brussels. Cut off from the excitement and stimulus of the great events he had lived through, he lost much of his old energy. Toward the end of his life, he executed, probably with considerable help from a Belgian pupil, François-Joseph Navez, one more remarkably convincing portrait: The Three Women of Ghent, and his last great work was Mars Being Disarmed by Venus and the Three Graces (1824).