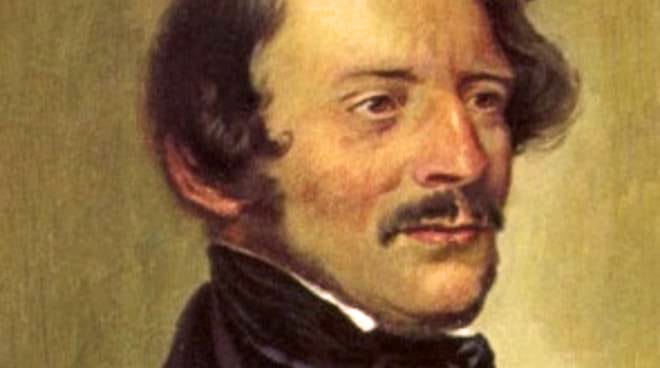 Domenico Gaetano Maria Donizetti was an Italian composer whose numerous operas in both Italian and French represent a transitional stage in operatic development between Rossini and Verdi. Along with Gioachino Rossini and Vincenzo Bellini, Donizetti was a leading composer of the bel canto opera style during the first fifty years of the Nineteenth Century.

Donizetti began his musical studies with Giovanni Simone Mayr, a Bavarian priest who was musical director of Santa Maria Maggiore, Bergamo’s chief church, and also a successful composer of opera. As a choirboy Donizetti did not shine, but Mayr perceived in him a nascent musical ability and secured his entry into the Liceo Filarmonico at Bologna, where he had a thorough training in fugue and counterpoint. His father hoped he would become a church composer, but, though he did compose a vast quantity of sacred music, his natural instinct was for the theatre.

Donizetti scored his first success with Enrico di Borgogna, which first appeared in 1818 at the Teatro San Luca, in Venice, and during the next 12 years he composed no fewer than 31 operas, most of them produced at Naples and now forgotten.

In 1830 his Anna Bolena, produced in Milan, carried his fame abroad to all the European capitals and eventually across the Atlantic.

Two years later he scored another lasting success with L’elisir d’amore (The Elixir of Love), a comedy full of charm and character with a libretto by Felice Romani, the best theatre poet of the day. Lucrezia Borgia (1833), also with a libretto by Romani, consolidated his reputation at La Scala in Milan and elsewhere.

Donizetti returned to Naples for the production of his tragic masterpiece, Lucia di Lammermoor (1835).